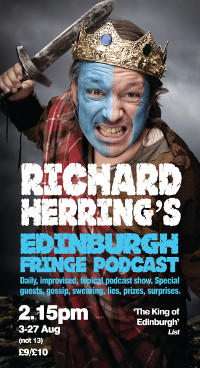 Brought to you by the British Comedy Guide

This is the only Royal Jubilee that anyone is talking about this year. Fringe royalty Richard Herring ("The King of Edinburgh" The List) celebrates the 25th anniversary Silver Jubilee of his first Edinburgh appearance with this daily, improvised, topical chat show with some of the present and future stars of the Fringe. A fantastic live experience for anyone in town, but also released as an unedited podcast so people around the world can get a flavour of the greatest Arts Festival on the planet from the best venue in town.

Herring, dubbed "The Podfather" by the Guardian, has embraced the new autonomous medium of the podcast, and having created iTunes chart topping and award winning podcasts including Collings and Herring, As It Occurs To Me, Me1 vs Me2 Snooker and Richard Herring's Leicester Square Theatre Podcast.

In a different show every day Herring and his guests will dissect the news, spread gossip and lies and reminisce about his many Edinburghs of the past. At turns outrageously funny, offensive and surprisingly serious.

You can listen to every single episode for free at iTunes or the British Comedy Guide website, or come and see one live and have a chance to win prizes and tickets to other shows as well as interact with the show!

Totally different every day, but reassuringly exactly the same.

"The punk rocker of comedy" The Scotsman