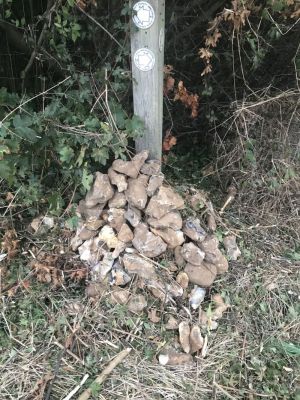 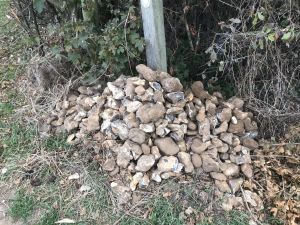 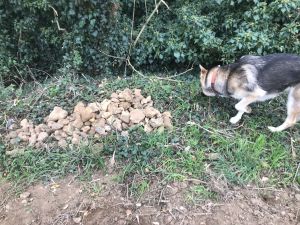 Rumbled! I had had a fine day of stone-clearing, managing to avoid seeing anyone else, but slowly building up the cairn, creating my own wall foundations and chucking countless stones into the bushes, but just as I headed home, I couldn’t resist Hasselhoffing deep into the stocean to harvest some tasty icebergs and whatever the ones that are on top of the soil are called. I was filling my bag so I could add them to another cairn I was creating on the south part of the field. Though I’d checked that I wasn’t being observed, a sneaky dog water had appeared from the track behind the field and caught me in flagrante.
“Hello” he shouted with triumph,
I scooted back towards him, hoping that he’d think I was just burying a dog turd, but he knew exactly what I was doing. But not necessarily why.
“Collecting up stones?”he asked.
“Yes,”I said, desperately trying to think of an excuse to justify my behaviour. The other day another dog walker had said she didn’t like her dog running on the field because she was worried it would cut its paw on the flint (and I have to attest that some thin scars on my fingers bear witness to how sharp some of the stones are - stone clearing is a dangerous business and though the objects of my desire can be pretty, they can also bite. Also none of them are pretty). I mumbled something about trying to clear flint off the field for the sake of the dogs, but he wasn’t going to believe that. My bag was bulging with large round orbs, as likely to harm you as the bollocks of a huge potato monster.
But then the man confessed. It was he who had started the cairn that I had been adding to. He said that as he crossed the field he liked to pick up one stone and deposit it there. He was doing the same thing as me. What were the chances that I would meet my ally and he would be the first to discover my insane secret.
And yet he was, I hope he won’t mind me saying, an elderly gentleman. Even if he crossed the field three times a day, he did not have enough time to make any impact with whatever time he has left. I am adding 25 to 50 stones to his pile per day and probably have another 50 years of stone clearing ahead of me. So my goal of clearing the field is realistic. He was an amateur. We both knew it.
He wanted to know what I was doing with the stones, and I said I was going to build a wall round the field and he pretended not to think I was insane. But they said Einstein was insane (probably). They said Noah was insane. They said Jeffrey Dahmer the Milwaukee Cannibal was insane.
Talk will be all round the village now and my secret will be out. I had been so careful to keep all this my own dark secret.
But here are some photos that show how much I have built up the crazy man who thinks one stone a day will make any difference’s cairn (and yes I am annoyed by whoever let their dog shit right by it and didn't pick it up- a genius is never recognised in his own home field) and some work on a wall on the other side (dog for scale, sorry that you don’t know how big the dog is), though this is just a tiny part of my work. But I think you’ll agree my two weeks of adding to that cairn, knock my friend’s work into a potato monster’s cocked urethra.
Only time for one dog walk for me today though, as I was heading up to Manchester to record two podcasts at the Manchester podcast festival. Rather than heading into London and changing stations I decided to give driving to Milton Keynes station a go and that worked quite well. I was lugging a suitcase full of new books with me, but luckily I’ve been building up my muscles on the field - why didn’t I just tell that guy that this was an exercise regime, which, in a way, it is.
And I had a great evening chatting with a man who is so much more than a Doctor Who fan, Toby Hadoke (though I only wanted to talk to him about Doctor Who, obviously) and outspoken and shocking Canadian comic with a centre made of marshmallow and the spleen of a poet, Glenn Wool. The show had been sold out for weeks, before the guests were announced and in a theatre the same size of the Leicester Square Theatre where some of the shows, even with great line-ups aren’t yet half sold out. So I think this has convinced me that next year I will take some of the podcasts out on the road. I don’t think we’ll be able to film them, and it might be trickier to attract big name guests (though maybe get some who wouldn’t come to London) but it was very encouraging to see that people bought tickets on the strength of the podcast, not the guests. And then ended up with two excellent guests.
Thanks for the podcast festival for inviting me and looking after me very well and thanks to all the people who came. Manchester will definitely be a place I return to to do more
Not quite sure when these two podcasts will go up, but probably soon as bonus extras.
And London - use me or lose me. Monday’s RHLSTP has an exceptional line-up of Alice Lowe and Jess Robinson, but hasn’t even sold half the tickets yet.
If you don't want to play I’ll take my ball away.