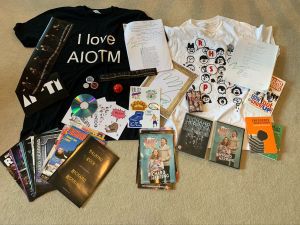 Episode 4 draft one is now complete - a little bit later than I hoped. But I had a burst of creativity at about 7pm and if I can keep that up for 12 hours tomorrow then I could maybe have two more scripts done (that won’t happen- I will settle for a quarter). I can’t quite believe I’ve managed to get this far as I felt uninspired for the longest time and had little idea how this series would go. To be fair I only have the flakiest of notions about what might happen in the next two episodes, but feel now that it’s at least possible that I will manage it. In September I thought it was too late and that nothing was going to come. So to have four scripts is a sort of magic. We will find out at the read through on Wednesday if they’re any good or just consist of the characters saying “All work and no play makes Jack a dull boy” over and over again.
There’s certainly a lot to do with the ones I’ve done and I need a through-line for the younger characters who have next to nothing at the moment. But over halfway and I’ve shown it’s possible to do a first draft in three or so days. The record is still six weeks away and even accounting for Christmas and me being drunk for the first fortnight of 2020, it’s looking like it might be OK,.
I am aiming to have the whole family killed by a meteorite at the end of episode 6 though, so that I never have to go through this again.
Woke up in Sheffield in a hotel that looked nice from the outside, but was a bit fading when you experienced it. You get to see the cracks in the facade a bit when you stay in lots of hotels and be able to spot  the places that are making the effort and those that are cutting corners. My room had a bath, which was nice, but it hadn’t been cleaned and the hairs of the last guest were stuck to the bottom and their used shampoo and shower gel bottles were still on the side of the bath. It didn’t matter as there was a separate shower and I didn’t want a bath, but it indicated that things were rushed and the hotel was perhaps not allowing its cleaners sufficient time. It was no bogey on a shower curtain, but was indicative of a greater malaise.
The hotel also had a sign hanging on the towel rail reminding us to reuse towels to save the planet. No one is really fooled by these - we all know it’s about the hotel trying to save on costs. This was confirmed by the fact that the towel rail was burning hot. I touched it for a second and had to put my hand under a cold tap. Wasting energy on having warm towels would be my first measure if I cared about the environment and was weirdly wasteful if the place is trying to save money too. I’d rather have a big towel, but the bath towel was nearly a hand towel. The shower was grotty and old.
I don’t particularly care, but it was all at odds with the image that the lobby was trying to project.
And the signs were there at breakfast too - the scrambled eggs just a bit too watery, you had to put aside five or six plates and bowls before you found one with no bits of old breakfast stuck to it, the staff seemed tired and glum. And that’s the kicker - serving breakfast at a hotel is a hard and thankless job and one where it is hard to keep up staff morale. But you can see from the faces of the people helping you if they are overworked and underpaid. They did the best they could, but they knew that they were fighting a losing battle and none of it was their fault. The effect was just to make me feel a bit sad too. A hotel that is touting for your return business knows the importance of keeping the cracks papered and putting on a little gloss. The one concession that this hotel had made had burned me in the hand.
We hadn’t paid a lot to be here, though it was a four star hotel, but the sense that things weren’t going well here was palpable. Everyone did the best they could and I am not going to be the kind of cunt who names and shames or rings down to reception to demand the bath that I didn’t want to use should be cleaned. It just interested me that you start to be able to sniff out the economising.
I am just glad that I don’t have to stay at too many hotels these days. And that when I do I am only there for sleeping and breakfast. If I ran a hotel though, I’d make sure the breakfast was excellent. It’s the last thing you experience and if it’s good can even make up for a hairy bath and a hypocritical position on the environment.
Tonight I recorded Stone Clearing Chapter 45 in the dark
Winner of this month’s badger monthly draw is Ramzi Shammas of Harpenden. He gets all the stuff pictured (and a bit more). There’s the usual bumper end of year draw coming up at the end of December, so sign up now to be in with a chance of winning and getting all kinds of other extras, whilst contributing around 40p per podcast (whilst we’re doing two a week, which we will be til about April). You can also get ad free versions of the podcasts there.