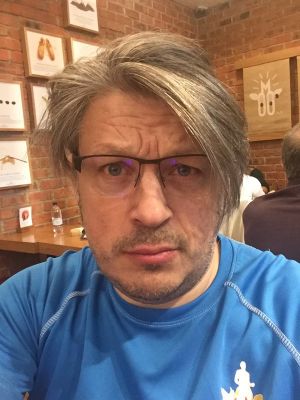 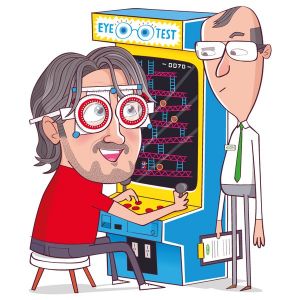 I went to pick up my new glasses today. It’s a sad day for my delusions that I am youthful and immortal. I mean I am still pretty certain that I won’t actually die, but this has shaken my faith a little bit. But I might have to accept that I will live the rest of my life as a German middle-aged woman.

I have varifocals and am supposed to use different parts of the glasses for working at the computer and reading. I really haven’t got my head round that yet. So far on the limited occasions that I have used them (like now) they are just making things go blurry at the wrong time, then occasionally focusing sharply and thus making me feel much more blind than I am. But apparently I will get used to them, if I remember to put them on and have them with me and if my daughter doesn’t grab them and smash them.

It’s strange that I look like a different person with my glasses on and even though I won’t have to wear them most of the time, it does signify a change in my life. Or is at least symbolic of a shift that has been happening slowly over the last decade or so. But the elastic in the tectonic plates of my life has snapped and I can no longer go back to who I was before. My mind is gradually turning to my next new stand-up show (the next tour will be a best of show, but I plan to return to the Fringe in 2017 for my 30th anniversary) “Oh Frig, I’m 50!” The changes that have occurred in the decade since I last took stock of my age are immense. But I think with the 40 show there was an underlying understanding that I wasn’t actually all that old (even if it did throw me into a bit of a crazy midlife crisis that peaked with a champagne bottle being inserted into my mouse hole) You can find out all about how low things got by reading How Not To Grow Up.

But even then I understood that getting to 40 was reaching the peak of the hill, still being able to look backwards to your youth and grab a few less blades of grass, but at 50 I am on the toboggan ride down the other side with literally no way back. I am enjoying the sensation of the years whooshing by (how is it possible that it’s now five years since Bin Laden was killed?) and am hoping for a couple more decades in reasonably good shape, but you know, it’s just quite a difference to how things were 9 years ago. It’s mainly better of course. It’s almost entirely better. But here I sit, with my reading glasses, aware that I am slowly atrophying.

Fittingly my Metro article about the eye test came out today.

It gives further examples of how things are changing with age.

And I can finally properly announce that I am one step closer to the Turner Prize as the world of extreme performance art has realised the cultural significance of Me1 Vs Me2 Snooker and I will be headlining Tempting Failure  on 28th July. I think you will be able to buy a ticket just for the night I am on soon, or you can buy passes to the whole thing. Even if you just come on the night I am you will see some extraordinary things. I had to sign a waiver saying that I would be responsible if I was hurt or strangled or cut on stage. And I know that other potential artists at the festival included someone who cooked their own effluent and another who did karaoke with her lady bits. You will almost certainly see a bare lady (or a bare man), though behaving in such a way that might scare the average (I imagine virginal) Me vs Me snooker fan. I love the fact that what I am doing is considered extreme (and indeed compared to the other artists I am), though am of course furious  that the only place I can play publicly is at at a festival of art and not sport as it should be. And I am disappointed that that cool intro video doesn’t cut from bare ladies to me playing snooker against myself.

But anyway this will be a rare chance for you to see some live frames of self-playing snooker and mix with extreme art fans. I mean, what can possibly go wrong?

I will also be signing and selling off the snooker balls used in the art installation afterwards (all the money will go to SCOPE) so there will be a chance to own some of the "art".

Retro RHLSTP with Josie Long is up here