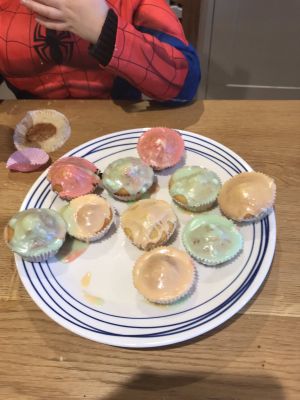 I put the deposit down on a brand new (second-hand) electric car today. I will be picking it up on Tuesday and am very excited about this brave new world. I think I managed to get a good deal, using all my poker skills, though it’s possible that the dealership were desperate to offload this car and I have been sold a pup. Only time will tell.
I spent the morning clearing out my old/current car, mainly of old bits of rubbish and sandwich, but also found some sunglasses and bits of equipment that I’d forgotten about. In the spare tyre compartment I found six pence and a full bottle of shower gel. Thank goodness I recovered this before the exchange, or my good deal would have been blown.
It was a bit like preparing a body for a funeral or maybe more like looting a corpse. But the corpse of someone you’ve been best friends with for six years, but are now getting rid of because they do really bad farts. My favourite thing was removing litter from the compartments in the door that I’d steadfastly failed to clear out for months if not years. I was even considering giving the car a hoover, something I haven’t done for at least a year. But you want a corpse to look presentable for the body-snatcher who will be taking it off your hands.
I realise that to someone else I am going to be Ryan now. My car will be searching for my phone. But my phone won’t be there.  Why has I forsaken thee?
Today’s cooking magic was fairy cakes which I made with Spider-Person. They had taken off their mask, but I am not at liberty to discuss their true identity. I continue to be surprised by how recipes work - again, it seemed unlikely that all the sugar and flour and butter we were splashing all over the kitchen could be transformed into sponge in 30 minutes. But it was. And we even made icing. In three different colours. My stupid daughter… I mean my stupid Spider-person put too much water in the green icing, but I more or less rescued it with more icing sugar (who knew icing was just made of sugar and water? No wonder I am going to be dead by the time I am 55), because I had worked out the icing formula.
I thought that the splodges I had put in the fairy cake cases would come up as weird and misshapen cakes, but through the magic of an oven, they looked like proper cakes from off of a stall at a fete and the sponge was light and fluffy. Someone should make a TV show about people making cakes. No one would believe how this stuff actually works.
New tour show RHLSTPs are being added to the gig guide. I will be in Bilston, Wolverhampton on 1st February and I am somewhat overwhelmed by how quickly tickets are shifting, in numbers that I have never experienced before. The Birmingham gig in MARCH only has about 50 tickets left, which means I have sold over 1000 tickets for the first time in my life and Brighton/Hove went on sale today, but seems to have pretty much sold out already. I am sure Wolverhampton, as usual, can bring me down to earth, though perhaps it one day might be through RHLSTP that I can fulfil my ambition of playing the massive venue with the jacuzzi in the dressing room at the Wolverhampton Civic.
As Richard Herring fans you may be used to leaving ticket purchases til the last minute and seeing how you feel on the day. But something has changed, my fine friends.
The support is unexpected, but of course wonderful. It’s only taken 11 years of podcasting! And 30 years of being a comedian.
Still why did I waste my time writing and learning complex shows, when people just want to see me asking comedians stupid questions? I am an idiot.
See details of all the upcoming RHLSTPs, including another run at the Leicester Square Theatre here and BOOK NOW.