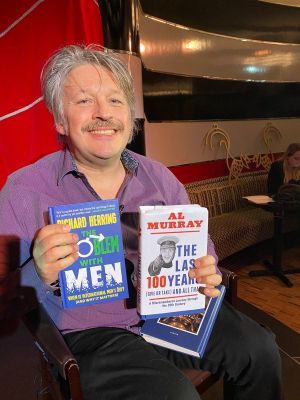 It hasn’t really felt like we’re in lockdown out here in Herts. The schools and playgrounds are open and my mother-in-law is allowed to help with childcare (as I understand it) and it seems I am allowed to do the occasional socially distanced job.
I risked a taxi ride (perspex screen and face masks) and headed to Soho to talk to Al Murray about his funny (and actually pretty informative) new book - The Last 100 Years and All That in the bar of a closed restaurant.
It didn’t seem like London were taking the lockdown too seriously either. Even though it was Sunday evening and the shops were all closed (I don’t know how many of the central London shops are classified as essential and can stay open) there were an awful lot of people milling around Oxford Circus. More than usual for a Sunday I would have thought.
Yeah, I was out too. And confused about why it was allowed. Are live streams essential too? We did keep properly socially distanced and it was a skellington crew, so I think it was safe. Though I had to pop into Wholefoods for my dinner (one of the few places that wasn’t dark - including the venue we were in, very creepy walking down basically unlit stairs) and that was pretty rammed. Have none of us seen zombie films?
It was fun to have an almost social night, catching up with an old pal (we have now known each other for over 33 years and the late 80s turn out to now be included in history books) and chatting about our stupid (and occasionally smart)  historical theories. We were there a bit too early so we got to chat about more and to look forward to a time where we might actually be able to have a proper gathering or night out. I wasn’t having too many of those before lockdown because I am both 53 and the father of two young kids, but I still miss them.
So we chatted about cock up versus conspiracy and how the assassination of Franz Ferdinand was riddled with cock ups on both sides (and whether World War I would have started if FF's driver hadn’t taken a wrong turn) and how the world has twice been saved from nuclear war by a Russian deciding not to press the button and how sex was invented in the 1960s and much more. We also chatted about the challenges of writing a book in lockdown and how having less words to do makes the job harder, but maybe how the precision required makes for a better book. Al’s done an admirable job of condensing 20th Century history into one tome, which is both entertaining and educational. I recommend it. But only if you’ve already bought The Problem With Men, which is better.
You can still catch up on the event (and buy both books) here.
And look at my burgeoning moustache in this deeply unflattering photo.
My driver home seemed confused about where the A1 was, and even though he had arrived before the event started and waited for me, hadn’t used that 90 minutes to fill up, so we had to stop for petrol. But he got me home and I still had time to watch half a film with my wife. So maybe having boring things like live audiences and places to drink and eat after a show just make things more difficult.
Nice to do a sort of live gig and another person to person chat. Though I have to say, I am not really minding doing it all online.