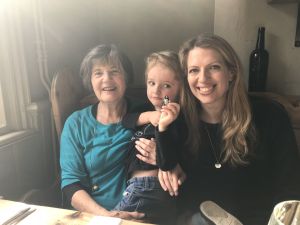 My son’s first birthday party was with his parents, his sister and his grandparents. He didn’t mind this time round as he didn’t seem to fully appreciate anything that was going on. But I’d love to make this the cast list for his next seventeen birthdays too. Partly because it would be terrible for him, but partly because it was a lovely day (even if he slept through a lot of it).
Phoebe was carrying the black penguin from her Penguin Race game around with her all day (the other day, when I was away, she seemed to be claiming that the penguin was a conduit to someone called Simon who was telling her what to do - hopefully something inspired by the game Simon Says, but if I find out a baby called Simon died in our house then I am selling up - she put on a right Red Rum kind of voice which made me glad I wasn’t sleeping there that night). And every photo we took, Phoebe insisted on holding the  tiny penguin up so it was in the photo too. It was rather brilliant. I took some nice moody shots of my mum, my wife and my daughter in the pub where we went for Sunday lunch. The light through the window caught their faces and made it look like I’d used some swanky filter and with the bottles in the background it almost looks like an oil painting  Alll three of them look beautiful. But one of them is holding a penguin. But I like them more for that. And Phoebe’s right to be impressed - that penguin has been the star of a major stand up show (though always played by another actor) and is the closest we have to a celebrity in our family.
Phoebe also claimed that another of Ernie’s new toys: a box with four differently turned buttons and switches that made animals appear out of the top, was able to return your dreams to you. I told her to be careful about using it on me, or it might return me to a time where she didn’t exist.
This was nonsense though. I wouldn’t swap this time for anything. Well not permanently. If the toy would let me have a week of being 35 again before returning me here and as long as the new things I did didn’t affect the future, then I’d probably give that a go. Just as a holiday. That made me realise how lucky I am to have what I have.
Like my son doing the biggest wet shit in his nappy today and then kicking his legs around as I attempted to clean him up. You can’t beat a memory like that. And as it was his birthday I had to go along with it.
I am not even kidding. Assuming we don’t put ourselves through the first year of raising a human being again (and I think I’ve timed it right so that I won’t be around to do this for my grandkids and have hacked off my testicles so that I can not sire another) then there is a sense that we are doing things that soon we will no longer do. Ernie has moved over to cow milk from formula (which might the reason for his impressive shits), so that is goodbye to the Perfect Prep machine, which will go up in the attic just in case that God chooses to impregnate my wife to make the new Jesus. She’s as close to a virgin as you can get these days. One day I will find the Perfect Prep machine in the attic (or if we’ve given it away to someone else, maybe one of the bottles we used) and I will probably cry. It’s strange that this awful Hell is somehow the best of times.
But I loved my smiling baby trying to do a breast-stroke on his back through his own faeces and I loved my daughter holding up a penguin and claiming that her brother’s toys were enchanted and it was nice to share this day (and the kids being relatively good) with their grandparents.