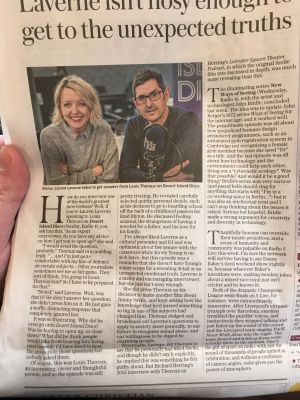 A nice nod for RHLSTP as the Telegraph compares it favourably to Desert Island Discs. I don’t agree with then about Lauren who I think has been doing an amazing job on that show, but regardless it’s a milestone for the podcast to get this little nod. And from the paper that declared me the Worst Comedy Experience of 2005… It’s all meaningless, good or bad!
My daughter’s devastating 4 year old honesty will one day land us in trouble. I think we got away with today’s exultation of frankness. We were in town and passed by a lady with her daughter. Phoebe turned to her mum and said “That lady is even fatter than daddy.” I enjoyed the burn on myself - hasn’t she noticed how much weight I’ve lost? And she was right, the woman had a sizeable belly on her. But of course as reasonable feeling human beings we were concerned the lady might have heard and been offended. I think Phoebe got away with it and of course, she didn’t mean anything by it. Though she did seem amazed that anyone could be fatter than her dad. We had a little chat about why wrongly the world is judgemental and rude to people who are bigger and that you have to be careful what you say about people, even if what you say is true. I told her that not everyone was like daddy and would find such devastating analysis amusing.
Man, I can still feel the burn. That “even”.
I managed a brief bit of actual work this morning before taking my turn to look after the fucking children (actually just the small one as the big one was at nursery and he was an unusual delight, sitting cuddling me on my knee and only head butting me about twice). I am just about ready to throw myself back into the maelstrom of writing after my disappointments with the script I wrote at the start of the year (and the disappointments with basically all the TV scripts I’ve written since 2007 - thank God for Relativity and curse it too cos I’ve got to write six more of those this year).  But I am thinking of trying to attempt a few ideas in book form, so am putting together proposals this week. Books are the hardest things to write, but they possible offer the most autonomy for the writer (if you can persuade someone to publish them) and I like the idea of having a couple of years where I work mainly at home and then my social life becomes the podcasts. We’ll see if I can get anything off the ground, but that would be a nice enough life for me. I always wanted to write stories (if you’re seen my posts about the Thriling Three and the Men of Phise you will be aware of that already) and the success of the podcasts actually gives me the freedom to give this a proper go, regardless of whether anyone actually pays me to write them. There have been so many knock backs and disappointments in my writing career, but my failures are largely down to myself and squandering opportunities. I am lucky enough to keep being given opportunities. It’s easy to be negative in this job, but positivity will drive you forwards.
I’m still going. Give me another thirty years Jesus, and see what I can achieve (sorry, it probably won’t help much with your ministry, but it’s not all about you mate).
And fuck I love hanging around with my family: my sweet and affectionate and thuggish son and my aloof and cheeky and funny daughter who delights in telling me she doesn’t love me, but only - I hope- because she knows that it’s a good joke. Though her best jokes are based on stating the truth. So who knows?
At the weekend I got to see people in showbiz who had their heads screwed on and someone who was struggling under the pressures that this stupid job exerts. It’s good to realise that (for now at least - we’re all just a hair’s breadth from disaster) I exist in the previous camp.