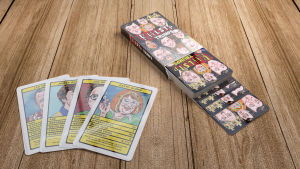 Touring RHLSTP Is great fun, but booking the guests is so stressful that it keeps me up at night. At least we now have two great guests for Brighton on Sunday (Simon Evans and Annabel Giles), but I am still one guest down for Leicester a few days later. And bad news for the Richmond gig as Tape Face has had to pull out (and I was looking forward to finding out if he’d keep the tape on for the full interview- hopefully we can reschedule or at least get one of the other Tape Faces on). I had two further soft yeses from brilliant guests for that gig, but both fell through today (though both likely to appear on the upcoming Leicester Square Theatre gigs). I started the day thinking I might have one too many guests, but ended with none. (though just heard Tape Face might be able to do it after all)
It’s a very difficult balance - book someone too early and you run the risk that another job will come up which they can’t turn down (I wouldn’t expect them too), leave it too late and it’s squeaky bum time as you wonder if you’ll get anyone.
I did manage to book a heavyweight intellectual for the Oxford gig today (news of who that is in the rhlstp.co.uk members area. They get to hear about all the big guests first. But I look down the list of venues and think, how the fuck am I going to get guests for Exeter (if the Edmondson/Saunders clan don’t get back to me).
It’s pretty hard to get hold of people unless I have some kind of personal connection or they respond to my tweets. Most agents just bat me away, if they even respond. And one of the issues I worried about with touring was that I either had to find the guest and a date they could do and then book the theatre (not always possible to choose a date like that) or book the theatre and hope local celebs would be magically available.
Perhaps I will have to bite the bullet and employ a booker for the show, but I think the people who come on generally respond to the personal invite.
It’s also pretty hard to find out who lives locally. The internet will tell you if someone was born there and if you ask on Twitter you get a lot of people speculating about who might live nearby (and again they’re often people I have no direct way of contacting anyway). I can, of course, book people who are not local, but will they be prepared to travel to Exeter for the pleasure of me being slightly rude to them?
I am just venting my frustration, of course. And yes compared to 98% of jobs this is still extremely easy. Doing RHLSTP is really one of the loveliest jobs in the world and the only stress, aside from the occasional drunk and obnoxious guest, is finding the people to be on it. I want to make these bills as good as humanly possible because I hugely appreciate you spending your money on coming out to see them. But they do give me the odd sleepless night.
Which is good because it distracts me from our disintegrating political system which would also be keeping me awake at night. So I am glad that I am kept awake by something more trivial.
Ticket sales are largely good (though a bit low in Brighton, Richmond, York and a couple of the later dates) and remarkably we’ve sold over half the available tickets already, even though there are 20 gigs still to go. Some of you are waiting for names and some of you are booking because you want to see the podcast! I like you latter guys.
Oh and look, the people making our Trump cards for us have mocked up how the pack will look using computer magic - and this is just the regular pack, not the super swanky one. So imagine what that’s going to look like. We’ve sold over half the executive producer credit levels in just 3 days, so be quick if you want one of those.
Kickstarter page is here.