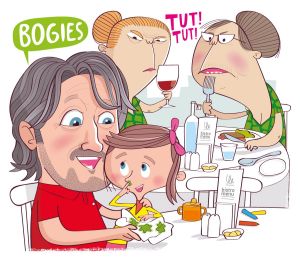 Last week my family took a short break to Charlestown in Cornwall. It’s where they film Poldark. Yet when I walked around town with my shirt off the locals all shouted abuse at me. Hypocrites.

It’s a beautiful part of the world and everyone was very welcoming. Apart from our first evening in town, when at 6pm, tired, but full of holiday bon homie we headed to the pub for fish and chips. The bar was heaving, but the barman said we might find a table at the restaurant/bistro. Indeed it was empty.

The restaurant manager came out and greeted us a little frostily. “Sorry, you would need a reservation,” she told us. I looked at all the empty tables incredulously. But maybe everyone else had booked for 6.05. We were told we could dine in the Bistro, which turned out to be a room immediately to our right, which if I hadn’t known better would have assumed was part of the restaurant.

But it was the Bistro.

A couple of middle-aged ladies were in there already, glumly eating their food in silence, resembling two giant tortoises, mourning the fact that they were the last of their species. Their eyes rolled as we entered. That’s understandable. We had a small baby with us. She might disturb the perfect silence that was currently punctuated only by the munching of their testudine lips.

But that’s life, ladies. You were once babies too remember? When you hatched from your eggs on the Galapagos Islands.

Phoebe my daughter had a bit of a sniffle and as she sat on my knee waiting for the slightly snooty restaurant lady to return with a high chair she grabbed a paper napkin and wiped her own nose. I was impressed by this new skill and congratulated her, encouraging her to blow. She did that too, garnering more approbation. I showed Phoebe the napkin and exclaimed, “Look at your bogies!"

Caught up with fatherly pride I hadn’t considered that we were in public. But who could be offended by a baby’s nose juice?

The tortoise women of Charlestown, that’s who!

“Do you mind? People are eating!” said one.

But I had been inconsiderate, so offered a sincere “Oh, I’m sorry."

“I should think so,” said the woman in a tone of high umbrage that would have embarrassed Hyacinth Bucket. Was there ever a more ungracious way to receive an apology?

I considered telling her to get over herself (in so many words) but instead just cringed at the social awkwardness. The fallout hung in the air like a stale fart. No one had brought us a high chair and the woman seemed unlikely to offer us her high horse, so we thought it best to leave them to their morose meal.

As we left I said, in a just too loud voice, “Come on Phoebe, let’s leave these unpleasant people to their dinner.” We headed to another pub where the staff were accommodating and the men at the next table chatty and no one objected when my daughter started dipping her chips into her raspberry yoghurt, like a mini Heston Blumenthal.

I was glad not to be trapped in a bistro off an empty fully booked restaurant with some sour strangers who hated life. And who, if they treat waiters with the same disdain, have undoubtedly eaten a few bogies in their time.

Last weekend I was on Channel 5’s Saturday Show, on my knees in between Bonnie Langford and Fearne McCann (from off of TOWIE and Russell Brand), operating a puppet made out of  scrunched up brown paper, whilst being petted by a huge orang-utan. At least I think I was. I haven’t been well and am beginning to suspect that most of my life is an hallucination.

Where’s my career? It’s behind you.