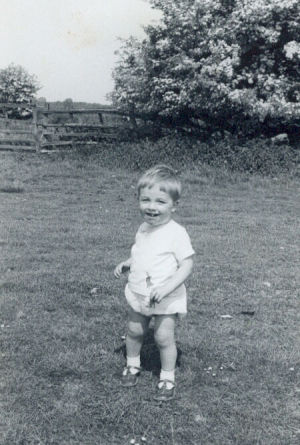 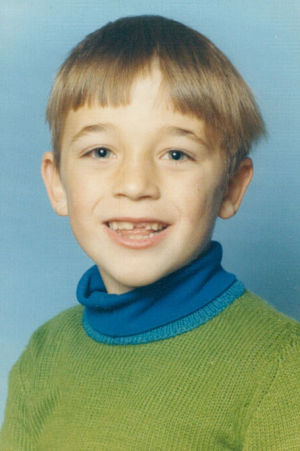 I have always been a big fan of comedy. I grew up in Cheddar in Somerset,where there was little to do and spent much of my teenage years, watching comedy on TV and listening to comedy LPs and tapes. Monty Python was an early favourite (though I only knew it from the records initially, which obviously, being a comedy nerd, I knew off by heart) I also enjoyed Not The Nine O Clock News and the Goodies. Later I would become obsessed with Rik Mayall I loved his character Kevin Turvey and used to watch A Kick Up the Eighties and tape only his bits. The Young Ones was clearly a big thing for me.
I had always loved creative writing at school, but when I got to about 14,me and my friends started writing sketches for school assemblies and also wrote a subversive school magazine called Inkings (our school being the Kings of Wessex, so you see we were in Kings. Very clever!)
In the sixth form we started putting on revue shows, which usually caused offence to someone or other. Some of these were driven "underground" (or rather we had to do them in the sixth form common room, after school) and at one of these I premiered my song "My Penis Can Sing!" My friends from school are much amused by the fact that in my thirties I am still doing shows about cocks (although for my parents it goes further back, because as a young child I would constantly shout "Poo poo, wee wee, bottom!" I have not progressed very far) 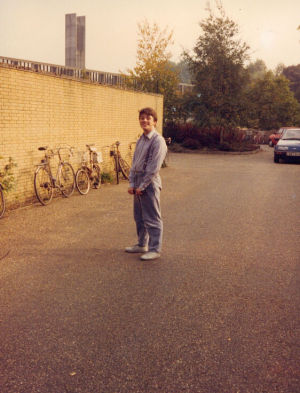 I went up to Oxford University, and was very keen to get involved in comedy.In the first term at an audition for the Oxford Revue (where I perhaps foolishly sang "My Penis Can Sing") I met Stewart Lee in a corridor.
I was asked to sing my penis song at the fortnightly Oxford Revue Workshop the next Sunday. On the way to the gig I saw Stewart sitting in the Kentucky Fried Chicken shop, eating chicken. He was on the way to a Suzanne Vega gig. But he didn't see me. Watching.
The audience at that gig were somewhat bemused by my song, though some of them liked it. It was the only ORW I could attend that term, as I had exams. However, I also heard people talking about the weird sketches about fruit that Stewart Lee was doing.
I met him again at the ORW Christmas party, in a cricket pavilion. He saw me dancing on my own to the Sex Pistols (I mean no-one else was dancing at all) and thought I might be OK. He'd heard about the Penis song. He thought it sounded good. We were both keen to do something different. We decided to do some sketches together at the next ORW. If I had known what this would lead to, I might have stopped in my tracks. No, not really. It's been great! 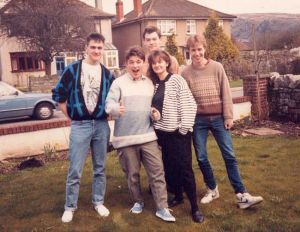 We teamed up with some friends of ours, Rich Canning (who is now a respected academic),Mike Cosgrave (a renowned metallurgist as well as a folk-jazz musician in the band Sine, Emma Williams (now Emma Kennedy the TV presenter, comic and the woman behind the beard of Nostradamus) and Jo Renshaw. We called ourselves "The Seven Raymonds" (there were six of us and as you'll have noticed none of us were called Raymond)
After a couple of terms of performing together we were given a slot at the Edinburgh Fringe by the Oxford Theatre Group.We performed a show called "KMNO4- the Potassium Permanganate Extravaganza at St Mary's Hall (now sadly an office block) to about 4 people a day. I also appeared in a children's show called "Old King Cole" at Abbey Laird Hall (which is also no longer a venue). Although no-one came and no-one reviewed us, we were able to return to Oxford and do the show again with the words "Direct from the Edinburgh Fringe" on the poster. It was a massive sell-out! By now Richard and Jo had left the troupe and we were joined by Tim Richardson (who is now a journalist who has just published an excellent book about the history of sweets!) 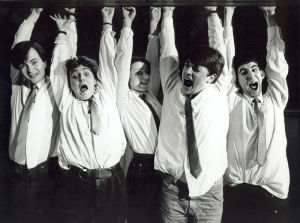 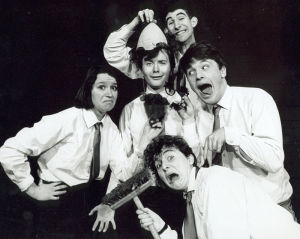 Stewart and me wrote the Oxford Revue "Waving at the Pigeons", which I also performed in. Also performing were Ben Moor (who is an actor and writer of great skill. Check out http://www.spesh.com/ben/) Emma "Kennedy" Williams, Ben Pope (whose brother Phil was in Radioactive) and Catherine Hood (now a doctor specialising in sexually transmitted diseases!) We did a short tour before our Edinburgh run.In Edinburgh the show got poor reviews and was sabotaged on the first weekend by Keith Allen who moved crash mats on the stage and tried to fight the company manager. I appeared on TV the next week to rebuke his statement that we were public school tossers (only Pope had actually been to public school) , but didn't really help things. At the time stand-up was in the ascendancy and student comedy (especially Oxbridge stuff) was being derided as old school and privileged. In fact we were sleeping on the floor of a Masonic temple with 50 other students and no bathroom and we were skint. We also performed at Late and Live (because they were going to give us £10 each) and were viciously heckled by an audience full of all the London stand-ups. Looking back I can see the humour of the situation, but all the bad press and aggressive attitude to us meant I was not keen to go back to Edinburgh or do comedy anymore.
Despite this horrible experience we did fulfil a second booking at the club the following week (because we needed the money) and put together a different set.Rather angrily I wrote a double act with Ben Moor called "Herring and Spaz" in which Ben was essentially my mentally handicapped younger brother, who I made dance for a Twix, which I then stamped on. I remember one of the Doug Anthony Allstars correctly berating me afterwards, as did another woman whose mentally handicapped sister had recently died.
I had had a pretty miserable year and I guess I had let it get to me. But to be honest, it was quite a funny act! 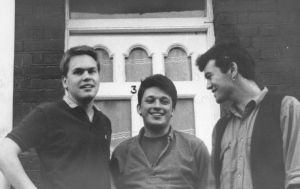 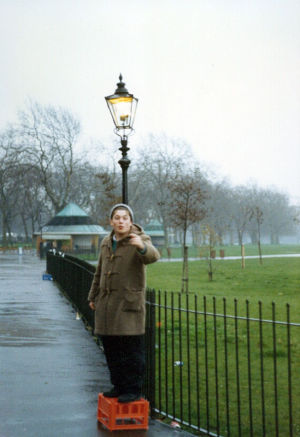 Stew and me came to London to try our hand at writing and doing the circuit.Stew was a lot more prepared for this as he'd been working up an act at University and at Edinburgh that year. I was still really writing sketches and character stuff. His solo career took off very quickly, whilst I experimented with different personas and material.I wasn't very good. About one in three of the gigs I did would go well, but one in three would go disastrously badly. Whenever anyone important came they seemed to see a bad one. I wasn't at all comfortable performing alone and I think my experience at Edinburgh had made me overly paranoid about the stand up circuit.
I did a variety of temp jobs including writing the phone directory for BT and finding lost invoices for a company that manufactured parts for lighthouses!