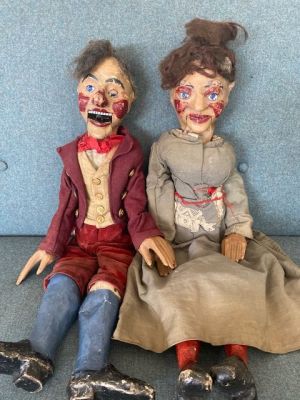 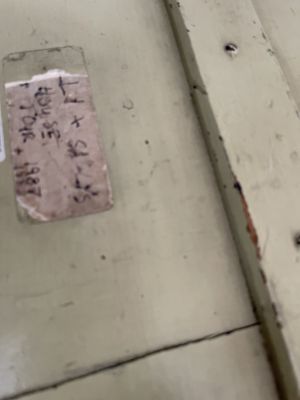 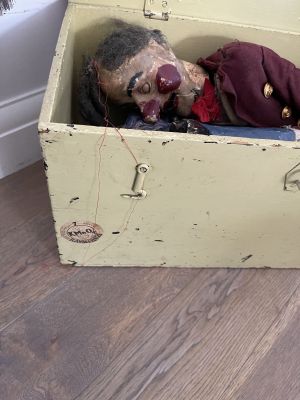 Ally and Sally have come this far on tour with me, but I am leaving them in York, at least until my return down south. I dropped them off this morning with puppet maker extraordinaire Richard Ison. As you may know Richard is someone who has enjoyed my work and who sent me some puppets he’d made. These turned out to be pretty amazing and lovingly made items, starting with the Duke of York and then Tiny Dick. We commissioned him to make Cocky Carrot and then Right Bollock. He is amazing. But I don’t know him from Adam and given the state of many of my fans there was every chance he’d be an insane weirdo who was only doing this so he could lure me to his house and bake me in a pie. That’s what 85% of my fans would do.
So it was a bit of a risk that I popped round to see him this morning and even if he turned out to be as relatively normal as it was possible for a man who takes on the job of making a puppet of a cancerous testicle to be, then it was still a bit of a risk leaving Ally and Sally with him.
They are irreplaceable and though Richard has been incredibly kind and generous to me, he is still a stranger. And he might have been so kind and generous because he gets off on destroying Victorian puppets or worse.
But the thing about me is that if someone makes me four or more exquisite puppets then I trust them completely and it turned out that Richard is a sweet and mild man who doesn’t even work in IT and has a wife and child. So as far away from a regular Herring fan as is possible.
They promised to look after my puppets and give them the care they need and I am absolutely certain that they will. Though it’ll be quite funny if their restoration job ends up making the puppets look like that monkey Jesus painting.
As much fun as it is to take the mickey on here and try to pretend that this perfectly lovely and wonderful family have some terrible predeliction for ancient puppets, I should remember that they currently have the puppets and can smash them to pieces if I am too rude. So I will wait until I have them back before I do anything like that.
They took off the dress that my Nannan made for Sally in the 1950s (I’m guessing) and revealed that the original dress beneath is still in fairly good nick, so that’s a good start.
As historic as the puppets are, the box they come in also is imbued with a bit of history. I don’t know who made it or when (I suspect it’s not Victorian, but I don’t know), but it’s been with the puppets as long as I’ve know them and has stickers from my first Edinburgh show, KMnO4 on it and a hand written note saying “Ally and Sally’s House On Tour 1987 and (I think) 1988” though part of the label has come off now. It’s crazy to think that it’s now 35 years since my first Edinburgh Fringe. The puppets weren’t even 100 back then.
Another fun family day. We played in Rowntree Park where Ernie speculated that the giant helmet in the grounds had been left there by a giant who had been killed in battle. He went inside it and said it smelled of wee and thought that maybe the giant had done a wee in it just as he died.
We bought sandwiches to eat at home, but when I tried to open the sliding door to the small garden, the key twisted like butter in my hand and broke. I had, it seemed, used the wrong key and thought that this might be a costly mistake, but a neighbour managed to get it out with some pliers later.
Then into town to see Roman finds and dinosaurs in the York Museum and then, because Ernie said he really wanted to do it, we went on a boat trip. He hated it from start to finish.
It at least saved us a lot of the walk home as it dropped us off much nearer to the house than where we’d got on. Up to Edinburgh tomorrow for Fringe 26/36 (though actually 34 really as I don’t think 2020/21 really count).
York is beautiful though. I would rather like to live here. Pros: I could watch York City lose in person, Cons: See pros.