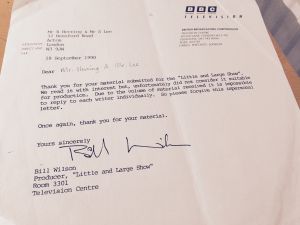 4431/17350
Amongst the many fun things that I have been finding in various files and boxes in my office is one of the very first rejection letters I ever got. But it was for something that I was more pleased to be rejected for than if we’d been accepted and also serves as an amusing baton pass between two comedic generations and an unexpected one degree of separation.
In 1990 Stewart Lee and I were trying to make our way as comedy writers and stand ups. I was on the enterprise allowance and he had landed a comparatively lucrative and flexible job on a massive Encyclopaedia of gardening- I think this one, for Stewart Lee completists - http://www.amazon.co.uk/The-New-Dictionary-Gardening-Volumes/dp/1561592404.
At night we were doing gigs, Stew far more successful than me and given we were poor and had not much else to do we’d have a go at writing for Weekending and for anyone else who’d take our stuff. Mostly this was things like Spitting Image (which we got about three sketches on) or pilots for new sketch shows (we had at least 3 meetings with producers who’d come up with the brilliant idea of a sketch show that was based on a TV set with someone changing the channels to zap from one sketch to the next - I suppose in the end “The Fast Show” refined this idea and took out the clunky remote control). One producer wanted us to write the links for a cat that lived in a spaceship who would show music videos (I think), but mainly all I remember is how he nearly caused Stew’s head to explode as he said, “Have you heard of Crowded House, they’re amazing”. Stew managed, for once in his life, not to say what he thought and we wrote some links for the show that (of course) never materialised. And we used the line in the teachers sketch. We ended working on the pilot of Michael Barrymore’s new Saturday night show. He didn’t end up using any of our post-modern and deconstructive stuff, but he liked it.
Anyway, amongst all the bits of work we did to gain experience and earn some money we got wind of the fact that Little and Large were looking for sketches. I can’t remember how and obviously our stuff wasn’t really a match for the mainstream double act whose star was on the wane. But we spent a few hours knocking stuff together, with our tongues firmly in our cheeks, no doubt slightly caught between knowing this was not our thing but thinking it would be nice to be paid. We couldn’t really resist writing stuff that took the piss though, but couched it in a way that we hoped might get it accepted. It was a strange tightrope to be walking. We’d been told they were shooting at the seaside, so anything that would work there had a good chance of being accepted. I don’t remember most of the jokes - there was one where Syd got on the bus and Eddie was the driver and Syd said, “Can I have a half please?” and the camera pulls out to reveal that Syd is only half a person. We’d then write “Eddie looks at the camera in disbelief” or whatever. We were essentially parodying the show by writing for it. We must have known they wouldn’t use this stuff, but we hoped they would.
The best one (which I think Stew may have obliquely reference in one of his TV shows) was the sausage in the snorkel gag. Eddie buys a hotdog from a van at the sea front and coats it in mustard and ketchup/ When he takes a bite the lubricated sausage flies out of the bun and lands in the sea. A few seconds later Syd dressed as a frogman emerges from the water in an agitated state. The sausage has got stuck in his snorkel. Sid waves his fist. Eddie looks at the camera in disbelief and then runs off down the sea front.
Utterly stupid. but imagine if they had done it. I wish these old mainstream stars had taken a chance and let new comics write them some post-modern stuff. It might have extended their careers a bit, who knows.
But on the 18th September 1990 Bill Wilson the producer wrote to us from Room 3301 (and I wonder if that was a room that we would one day use during our own short-lived double act TV career) to say “Dear Mr Herring and Mr Lee.
Thank you for your material submitted for the “Little and Large Show”. We read it with interest but, unfortunately did no consider it suitable for production. Due to the volume of material received it is impossible to reply to each writer individually. So please forgive this impersonal letter.
Once again, thank you for your material.
Yours sincerely
Bill Wilson"
The letter was stuck to my wall with blutak for a while (you can still see the marks on the back). It was a badge of honour. Then I thought it was funny, but in hindsight it’s a neat little document of two worlds colliding that were never meant to meet. But what fun it might have been if they had.
It’s good to see my book Talking Cock being used as an academic source in this recent Guardian article.  Which isn’t as ridiculous as it might seem. I did a lot of research for it and I think revelations like the men faking orgasm bit do a lot to challenge the stupid stereotypes we all have about men and that men feel they have to live up to. I am not saying that it’s harder for men than it is for women, but if we all understood what sensitive and insecure souls men really are I think things would be much better for us all. You can buy the book here - (or for only a fiver when you buy it with the Talking Cock DVD).