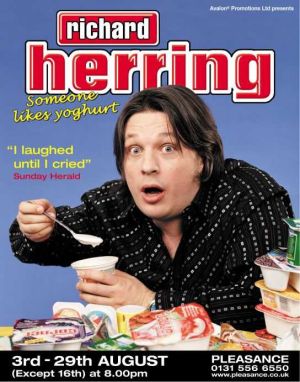 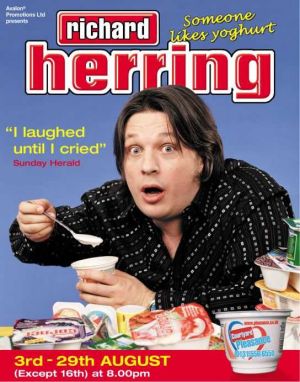 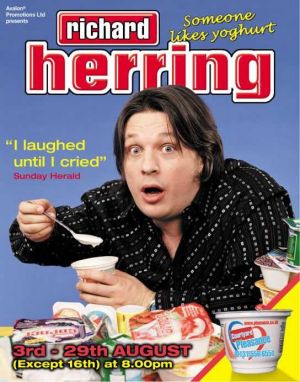 So with frightening and yet necessary haste the first mock-ups of the Edinburgh poster arrived in my in-box today. I quite like them, though don't think any of them are quite right, but thought you might be interested to see them. Personally I'm not sure about my name being in that yoghurt style font - I don't want to go for yoghurt over-kill as I don't actually like yoghurt that much despite all the rumours. I think the one with the black border at the bottom is best. What do you think? If you want to see my other general publicity shots they are in the downloads section. The idea of me sitting on/standing in the yoghurt pot didn't really work out. But I prefer these pics anyway.

I am attempting to re-write a treatment for a game show that I first wrote in the early 1990s called "Intellectuals and Idiots". The essential thrust of the quiz is that it takes a team of celebrities who went to University and pits them against a team of celebrities who didn't in an attempt to find out which is actually best, fancy book-learning or plain common sense.
I vaguely remembered reading about an incident from the 14th Century in which Oxford townsfolk spent a few days rioting and killing students and thought this would be a good basis for explaining the rivalry between students and normal folk, so I looked it up on the internet.
It happened on St Scholastica's Day (February 10th) in 1354. St Scholastica (literally she who has the leisure to study) incidentally is the patron saint of convulsive children, nuns and storms. Her patronage also extends to being against rain, which seems a bit short-sighted in the long run. Sure useful for days when youre having a barbecue, but if she proves too effective were all going to get a bit thirsty.
Anyway on her day in 1354 some posh students were drinking in the Swyndlestock Tavern in Oxford and accused the landlord of serving them indifferent wine. The regular non-University punters of the establishment took exception to their attitude and the argument escalated into a full-blown riot. The townsfolk beat and killed the Gownsfolk and ransacked their colleges for three glorious days before order was restored.
Nowadays, thanks to political correctness gone mad, attacking students is against the law, but I believe in honour of this historical event we should make an exception for St Scholasticas Day. On this occasion all decent, ordinary, hard-working normal people are allowed to absent themselves from their place of labour and search out University students. If they discover any they must playfully batter them round the head with twigs, branches or iron bars, but the beating MUST STOP once the student is dead. The only place where students might seek sanctuary from this charming tradition is within the confines of their library and even then only if they are studying within its environs. So ironically whilst everyone else gets the day off to hunt down students, St Scholisticas Day is the only day of the year when students actually have to do any work. But as long as all the students stay in the library, the rest of us can stay in the pub with our feet up, drinking indifferent wine to our heart's content. Sweet!