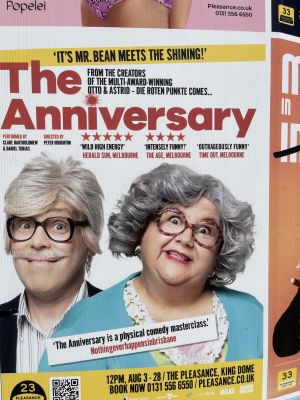 The shows continue to be fun - some have been quite serious, but today was knockabout fun with Ed Gamble.  I managed some decent stand up observations on the posters of Edinburgh, though one of those posters was an advert outside Pizza Express for their new duck pizza. “Who let the ducks out?” was the strap line. Now not only is that a very poor pun - in fact barely a pun, but it doesn’t work as a joke. But also in this instance it seems more like a terrible accusation. Because the ducks are now dead and on a pizza. Who let the ducks out? Because they’re going to be in terrible trouble. The ducks have been shot and put on a pizza. We must find the people responsible.
The other was for a show called “The Anniversary” which is billed as “It’s Mr Bean meets The Shining”. But again this doesn’t seem like a recommendation. Combining those films would actively spoil both of them. Adding horror to Mr Bean would mean it ceased to be funny and adding Mr Bean to The Shining would really take all the tension and fear out of the thing. I am tempted to make the film just to demonstrate how bad it would be, but it would take an awful lot of money to get the rights and have Atkinson on board and I don’t think it would sell many tickets. But there’s a new Emergency Question in it about which two art forms would be the worst ones to combine. Maybe everyone should be forced to watch some ducks be shot and then fed them on a pizza before going to see the film. Some Pizza Express product placement could help with the budget.
My wife and I have not seen much of each other this last week or so. But today we went to a show and had dinner, but in our mutual free period between 4 and 7. We saw Sofie Hagen who was very enjoyable and interesting and indiscrete as always. Their audience correctly adores them and I am correctly feeling very smug about getting those pronouns correct (see the show for full humour of this remark). Sofie said that their friend’s 13 year old daughter had found out they were a comedian and said “Oh, retro,” which made me both laugh and be sad at the same time.
Catie and me had a nice meal in a quiet restaurant and then went for a drink in the Underbelly gardens and then I came home, finished getting the kids to bed (not too successfully), watched the second half of Monty Python and the Holy Grail, because I know how to spend the Edinburgh Fringe and then fell asleep on the sofa at 9.30pm. Tomorrow’s guest Tim Key has a show that starts at 10pm. He might as well be performing on the moon for all of my chances of getting to see him. Three quarters of the way through now though, so the end of this sauna hot nightmare is in sight.