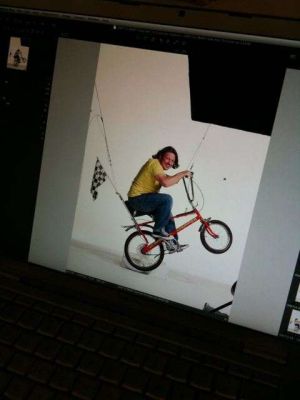 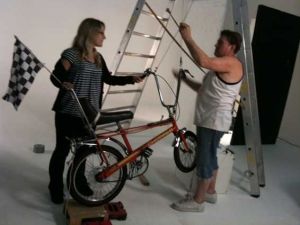 This morning I found myself wearing a Mr Man T shirt, sitting on a vintage Chopper bike, floating above the ground attached to the roof with metal wires, in a wheelie position.
What did you do at work today?
I am 42.
This wasn't just me dicking around though. This was important. We were shooting the cover photo for my new book "How Not To Grow Up", the idea for which is me cycling through a crowd of drab and grey commuters (businessmen in their suits and ties?) on a childish bike in childish clothes. But it continues to amuse me that people with proper jobs and responsibility have to help me to put crap like this together. It all gets taken very seriously, as it should do, because the cover of a book is very important. You shouldn't judge a book by its cover, but everyone does and the hope is that if the image is good enough then people who have no idea who I am will pick the thing up and hopefully buy it. They might be disappointed to discover that the actual book contains nothing about Chopper Bikes or wheelies, but I think the image (thought up by my editor Jake - coincidentally I have done something similar in the past for my Christ on a Bike poster) does a good job of summing up the spirit of the piece, though perhaps to be totally accurate there should be a hint of despair and regret on my face, rather than the unbridled glee we were going for.
The shoot went well, with some sterling work with a tiny wind machine giving a good feeling of movement to the pictures. The early shots were of me on the floor, but the only way to effectively get the wheelie shot was to string the bike up to the ceiling in position.
Some proper big armed men came in to set about getting the bike into place, but they were very much working it out as they went along, trying out different configurations with blocks and wires and weights. I was a little concerned that once I was sitting on the thing that I would be swung off on to the floor or the bike would fall apart, but other people were getting on to try the thing out. At one point the photographer jumped on and nearly went arse over tit and the decision was made to add another wire at the back. My fate was in the hands of men I didn't know. I would have to trust them and hope for the best.
In the end the bike was entirely off the ground, like ET himself was in the room.
Funnily enough now the bike was more stable than it was when it was on the floor and I was able to lark around and kick up my legs and let go of the handlebars with only the minimal chance of falling to an embarrassing death. I think we got some really fun shots. Hopefully enough to persuade the impulse buy customer. We'll see. I took a photo of one of the images on the computer screen for you to have a look at. Once the design magic is done to it it should look pretty amazing!
The interview I did with Den of Geek, just moments before my iPhone was so cruelly stolen is now on line here.