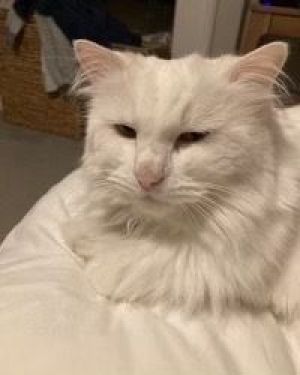 RIP Smithers Harris. You were a candle in the wind. A really stupid, fluffy candle with a death wish and a really stupid loud miaow. But we loved you nonetheless and it’s going to be weird not having you around after the last 9 and a half years of you constantly trying to trip me up on the stairs. At least you will be reunited with your sister Liono in Cat Heaven.
Here’s the day I first met Smithers - I’d forgotten that his birth name was Boy. I am glad we changed that.
Given that he was born with quite a few problems thanks to the unscrupulous breeder who had dumped him, he’s done very well. Poor old Lion-o died at just 3 or 4 years old.
Today I didn’t get to see the final moments as Catie had rushed Smithers to the vet first thing, as I took the kids to school. Smithers had been a little bit more lazy than usual and his fur had gone a bit straggly, but he was still happily playing with the kids and trying to trip me up on the stairs, pooing on the lawn and being annoying as usual. This weekend he quickly deteriorated and it was pretty clear he was on the way out, so it wasn’t a huge surprise when my tearful wife arrived back from the vet with an empty pet carrier. It was all so quick though that it’s taking some time to process. I pretended to be annoyed by Smithers (and sometimes I didn’t have to pretend) and he was always a bit stand-offish with me, but I am really going to miss him now he’s gone.
He’d more or less destroyed his scratching post on the landing, but Catie was keen to squirrel away any reminders and so I had to stuff it into the bin, which was an oddly emotional experience.
The kids had wished Smithers good luck at the vets and given him a goodbye, just in case, but they were still quite shocked by the news. Phoebe had been playing it cool beforehand and she’s at that stage where death is something to be bluntly talked about, but she was a bit shaken by the reality and Ernie who was particularly close to Smithers had a little cry.
I was delighted that Smithers had died.
Life goes on and there were some nice little triumphs to go with today’s disaster. Phoebe had lost another tooth. She’s started asking some tough questions about the supernatural creatures in her life. Yesterday she asked if Santa would ever die. And if not, what about when the world is sucked into a black hole at the end of time? It conjured up an image of a sad immortal Father Christmas sitting at the North Pole alone, with all humans, reindeer and elves having passed on eons ago, maybe still making toys that he could deliver to no one. The most cursed being. Today she asked the same question of the tooth fairy.
Basically she’s starting, at 7, to see the holes in the idea that anything could be immortal and the conflict between science and imagination. Some people live to 100 and don’t ever quite get that.
Catie’s podcast was nominated for two podcast awards, which is fantastic news and didn’t lead to any inter-spouse bickering as we had not entered any of our podcasts in these awards. And I’d still be glad even if we had, because Drunk Women Solving Crime is a banger of a podcast and shows what can be achieved if you have a good idea and are prepared to go it alone. I don’t think TV or radio would have even taken the meeting, with three unknowns. Like many others they just got on with it and made it work.  Check it out if you haven’t already.
And I was also honoured to be a guest host on another amazing podcast that has made a great success of itself in a short period of time, Michael Fenton-Stevens My Time Capsule. I interviewed him about his five items and it’s a charming and moving chat about his life and his family (and a bit about his work). Listen here and then listen to the other 199 eps.