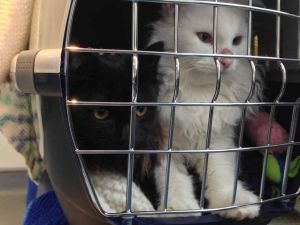 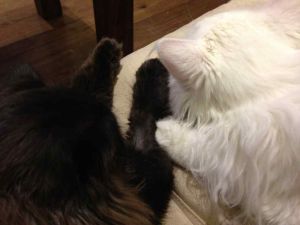 My wife has been wanting to get some cats for a while. I have been a little bit resistant because I hate all living things and have already taken on the responsibility of a wife and didn't need anything else to take up my time. Once upon a time I just sat in my house completely alone never interacting with anything and then my bloody wife comes along and ruins everything. Why can't I just be left alone to cry myself to sleep?
Today I finally relented and we drove over to Battersea Dogs and Cats Home to see if they had any rescued cats that we could take off their hands. We assumed we'd only get to register today and that it would probably take some time before we got a pet, but we were wrong.
I hadn't been to the BDCH before, but was impressed right from the start. We were asked to fill in a form and then they said we could go and see some of the available cats whilst we waited for an interview. We were warned that there weren't too many cats available as they'd had a busy weekend, but we were really mainly only window shopping for the moment. We were hoping to find a pair of youngish cats.
We went up a spiral staircase to the little cat hotel. The smell of cat was a bit overwhelming and didn't make me much keener to allow a small mammal into my life. There wasn't really a suitable cat for us amongst the few that were there, but sadly cats are coming in all the time.
We had our interview and were told that the younger cats were normally kept on a different floor so there would be some for us to look at. We went back upstairs and a couple of members of staff checked through our form and said they had a couple of options. They took us through to an office where five month old brother and sister Ella and Boy were playing. When we opened the door Boy came rushing out trying to escape, a big ball of white fur. Ella was inside, about half the size of her brother with dark fur and an impressive brown mane. They were both high-spirited and playful and melted my frozen heart pretty much immediately. Boy was deaf and Ella had a heart murmur and another little heart problem and their previous owner had had too many cats to be able to look after them properly. But we liked them so much we didn't even want to see the other cats on offer and I wasn't bothered that they had tiny cat disabilities or that Ella playfully bit me when I was playing with her. We weren't expecting to make a decision today, let alone to take some animals home with us. A vet came to explain the implications of their problems and we said we'd take them.
I was very impressed with the efficiency of the Home and with the helpfulness of the staff - several different people gave us advice and they rustled up a nurse to give the cats their vaccinations. But within an hour we were heading to the car with two very placid and happy cats in a carrier. After all my reservations I was besotted already. I never thought I'd be the kind of person to tweet photos of my cats, but they were too adorable.
We got them home and set them up in our basement room for the moment. Our main duty was to come up with names for them. We didn't want to use their slave names, because they were free now, but it was quite a responsibility. Of course in the case of the big white cat it didn't really matter what we called him as he would never hear his name, but then I doubt the black cat would understand her name beyond it being a sound that she associated with herself.I don't know, I'm not a cat.
The moment I had seen the black cat I had thought she looked like a tiny, cute lion and the immediate name that sprung to mind was Lion-o. This seemed a bit inappropriate given that she was female and slight and didn't have a sword, but I really liked it as a name. My wife was less sure about that. Carrying on the tradition of giving animals human names I fancied calling the white one "Ian Norman". Twitter seemed to agree with me that Lion-o was a great name so my wife agreed to that as long as she could name Ian Norman (as I am going to call him when she's not around). She gave it some thought over the afternoon and settled on Smithers, which I actually really liked. Lion-o and Smithers - now that's a cartoon I'd love to see.
The cats quickly relaxed into their new home. I was out in the afternoon filming an episode of Dara O Briain's Maths Show for Dave (new series starts in April), but by the time I was back they were lounging on the sofa and then they snuggled up with each other and held hands. Misfits belong together, I guess. They've found their place with us.
I will try not to make the whole blog about their cheeky antics, but here's a few photos for the ones who like that kind of thing. And do support your local animal home if you want to get a pet. These two are crackers. In both senses.