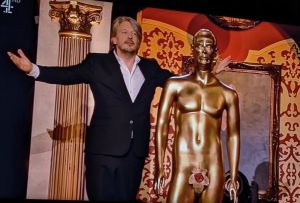 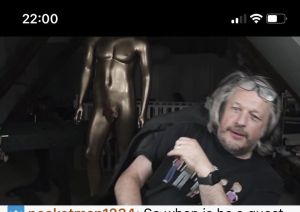 Finally the Champion of Champions episode of Taskmaster aired. It’s 9 months since we recorded it and 15 months since we filmed the tasks. It’s been a crazy long wait to keep all the secrets buttoned up (so well done also to the live audience who seem to be very reliable when it comes to keeping schtum).
But now it’s out and been aired and so I can tell you. I am the fucking greatest. Through nothing but extreme skill I won the contest. I am now a Champion of Champions of both Taskmaster and House of Games. I am the only person who has ever won both those titles. That’s in all human history. Just one person could say that. And that person is me.
I did a watch along with the Twitch of Fun crowd, after having done a very enjoyable puppet show (watch it here), but I’d already watched the programme quite recently because I had to do the Taskmaster podcast, which, as you can imagine, was a great pleasure for me. I’d have been happy if I had come 4th as long as Ed came 5th.
It was good to see me looking so fit (in the studio bit, it was 3 weeks since I had my ball chopped off when I did the tasks) and it made me determined to keep making the effort to lose the weight I’ve put back on and to get my hair cut. I was pleased with my performance over all. I only fucked up one task and if the remote control rat had been a bit more reliable would have done better in the one I came fourth in. But the grape and suitcase tasks (the last one the only one that mattered) I did very well in. Though it was certainly an advantage to go last in that final task. Liza was the star of the show with her amazing beard (and general competence),  but everyone got a moment to shine: Gamble’s prize task was maybe the best we’ve ever seen, Lou’s pulley system was incredible and Kerry’s bobbin was equally impressive (and I think her play deserved more).
What a year I had last year - to go from testicular cancer to Champion of Champions in just six months. You can read more about it in my upcoming book of course.
It’s all meaningless because we should have had more episodes (and I’d give up everything - apart from Ed coming last- to just do one more show). Maybe there will be a Champion of Champion of Champions, but will I be alive to compete? It’s only six years away, but the question still stands.
It’s such a brilliant show and such an amazing team behind it. Whether deserved or not, whether meaningful or not, I am delighted to be part of its history in this way. And to seemingly have turned around my TV quiz losing streak into an unstoppable skid mark of success.
And when Alexander saw the breadth of his domain he wept, for there were no more worlds to conquer… oh wait, Tenable. And Celebrity Catchphrase. It’s going to be OK.