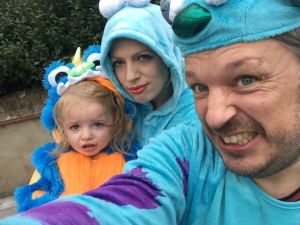 Another Saturday, another kid’s party. This time for Halloween. And like the coolest people on planet earth we all dressed up as monsters. I hope this is a tradition that will continue until Phoebe is at least 28 years old. There is nothing embarrassing about it at all. But as we were driving to the party in our monster costumes all I could think about was how the emergency services would be laughing if we crashed and were all killed. I am not saying they are callous and would find the death of a baby amusing, but it would be a welcome change to find a family of dead monsters in a car instead of a family of dead people. You’d be a cold-hearted emergency worker if you didn’t get a mordant giggle out of the whole thing.

But I wasn’t going to give them the satisfaction, so I drove super carefully and didn’t die. Take that you sick emergency workers. I am thinking of writing to the Daily Mail about the way you would almost certainly made light of such a tragedy.

Anyway I was dressed as Sully from Monsters Inc and my wife was the Cookie Monster. It's not quite Funella from the Furchester Hotel but if I close my eyes and squint I can pretend it's her. Ridiculously the costumes don't come with sex pouch openings. As if anyone would buy thee costumes and not want to go at each other's cookies.

It was a great party with lots to do and my little monster kept me busy. The bigger kids were playing on a trampoline and I was nervous about letting Phoebe have a go, but one of the other mums made the kids promise to go easy and after a little bit of confusion and worry Phoebe had a great time. Predictably the other kids were not true to their word and things got a little bit boisterous, but when I asked Phoebe if she wanted to come out she replied with a firm “NO!” that made all the other kids laugh and had them joining in and shouting the same. But as things got more rambunctious I didn’t want to go back to my wife with a baby with a broken leg so I took her out of the bouncy cage. She was not happy.

So though I have inherited my mother’s fear of everything that could go wrong, my daughter is having none of it and is going to throw herself into perilous situations. And I am glad she went into the cage of broken limbs because it was a great experience and there were points when kids of all ages were laughing  together, just at the fun of being something that wasn’t quite properly solid.

And before we went I managed to put the finishing touches to the Emergency Questions book. In the end I chucked in a few extra questions, just in case I’d miscounted or anyone thought that some of the questions were questionable. I think it’s an enjoyable read. Obviously it will take a while to design and print so you won’t be getting it straight away if you donated to the kickstarter, but if you missed out then we will also be selling some on the website in order to start raising funds for RHLSTP 2017. If everyone who downloaded the podcast bought one of these we might never have to kickstart again.

And I missed it myself but there was a comedians’ Pointless Celebrities tonight featuring two of the three partners I’ve had on past episodes, Rhona Cameron and Robert Webb. Richard Osman commiserated with them for having been saddled with the worst Pointless player ever and they both laughed and smiled. As if it hadn’t been them that had destroyed our chances of winning on both occasions. Now I know how Jesus felt when he was betrayed by his inferiors. And like Jesus I shall take my revenge on them all.