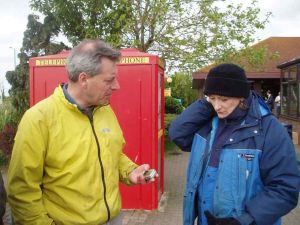 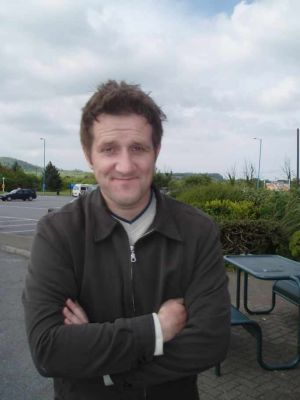 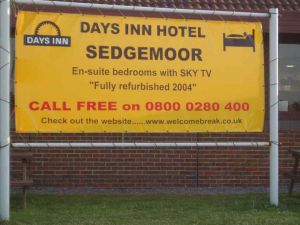 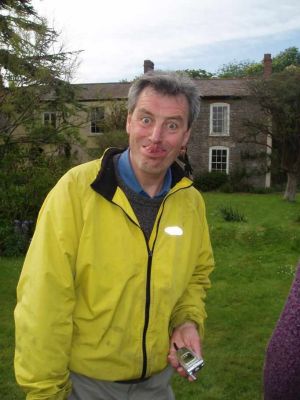 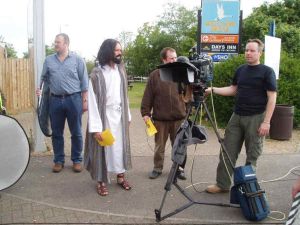 We were up very early to go and film at a service station for a scene where the cult are hoping to meet Jesus Christ, their saviour. Luckily it was a beautiful and warm day as we were going to be outside for the entire time.
A couple of incidents showed up how mean and stupid the British public can be and how stupidly they can react in the face of a tiny film crew. One car drove into the car parking area where we were filming, saw that we were mid-shot and then cleverly decided to toot their horn. Ha ha. That was funny. You just wasted everyone's time and money. A couple of stupid looking men leaned out of the window, leering. I was ashamed to be from Somerset, as these fools almost certainly were.
Not content with that, on their way out, they did exactly the same thing! For me it was the repetition that made it amusing. I don't know if they were stupid enough to think that they might end up in the film, or just if they got delight out of making other people having to work harder than they were already. Steve the cameraman was ready to lamp them, but luckily they left.
Later we were filming the bit where my character thinks he is meeting Jesus. We were down by the coach park bit and we had to ask a couple of drivers to turn off their engines so that we could shoot the scene without any additional noise bleeding on to the track. The first two drivers were happy to do this, but the third one refused. He claimed he needed to keep the air conditioning on, even when he was parked and that if he turned off the engine this would affect him being able to sell coffees to his passengers (most of whom had gone into the service station for beverages anyway). He was quite insistent that the engine couldn't be silenced even for two minutes whilst we got the shot. Whether he took offence at us having Jesus in the shot (though doubtful as there was no way of knowing whether we were praising or deriding him - neither as it happened) or whether he was just a jerkwad who got pleasure from causing unnecessary inconvenience to others, I will let you decide. Let me just add that the minute the camera was packed away the engine was suddenly silenced. It's at times like this that I would like to believe in karma, but I can at least take some pleasure in the fact that anyone who could behave like this must have a shallow and empty life and probably cries himself to sleep at night. All his actions meant was that we had to take a recording of the noise of his engine so it can run throughout the whole scene whichever take we use.
I have to say I did enjoy the sign at the Sedgemoor Services which is attached here, in particular the bit in quotation marks that says ""Fully Refurbished 2004"". Now not only does this seem a bit of a hollow boast now that we're well into 2005, but also the use of the quotation marks interests me. Is this like a quote from some press article about the service station (in which case it can't have been a very impressive article) or merely something that some customer or other person has said. Or do the quotation marks signify that it wasn't actually fully refurbished in 2004. They've had to put it in quotation marks because it isn't actually true and is meant sarcastically or ironically. If it had been fully refurbished in 2004 then surely there would be no need for quotation marks, assuming this isn't a quote from somewhere else. I love it when people use punctuation incorrectly. So much so that I like to do it too.
The afternoon filming was in a beautiful garden with a lawn thick with grass and moss which felt like a carpet. I lay down and tried to sleep and caught the sun. All the other actors apart from me and Emma finished their stuff today, but we've got more tomorrow (including our bed scene - she plays my wife, a role that she has been playing in her head for the last twenty years), so I took her home for dinner at my mum and dad's. She managed to charm my parents despite twice saying "fuck" in front of my 17 year old nephew, mainly by insisting on seeing baby photos of me the minute she was through the door. It's all part of her plan to become my real wife, but she has no chance. No chance at all. I will have to get drunk just to be able to lie in the same bed with her tomorrow and just thank God that we are playing a husband and wife who aren't getting on, so there will be no physical contact.
It was a great day's filming and not quite as exhausting as yesterday. I was sad to see my new friends disappear.

I have been asked by Timbertop Aparthotel to make it clear that the name of their business has nothing to do with segregation at all- it is just the word apartment and hotel joined together. I realise that this is probably apparent to most of you and that my comments are intended as a stupid joke, but Timbertop get a lot of international clientele who might not appreciate my pathetic humour, so I want to make it clear that the Timbertop Aparthotel does not segregate people by race or attractiveness. It is a charming hotel with a friendly staff and it does a great breakfast. If you are every unlucky enough to be forced to spend any time in Weston-Super-Mare then I would heartily recommend this hotel. Staying there is in my opinion the most pleasurable thing you can do in this unusual seaside town.