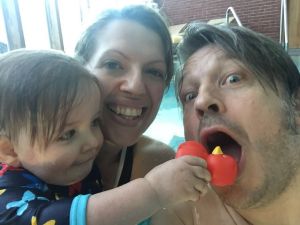 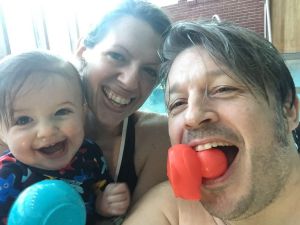 I am not sure we’ve ever been the first people down to breakfast in our lives, but today, thanks to our stupid baby, we were. But we had lots to get ready before our first day of skiing and it was pretty cool to watch the sun rising over the mountains, so I am going to count this as a positive. And more of a positive is that we had baby care set up for the day and even more importantly dinner time. I’d love to get Phoebe out on the slopes, but am glad that she’s too young, mainly because she will definitely be better at skiing than me. She is fearless and I couldn’t even look forwards as the cable car made its vertiginous lunge over another cliff.

Our ski nanny (there’s a sitcom right there) turned up at 9 and, of course, Phoebe, the hug-whore, liked her straight away. Our instructor was there before 10 and took us out. He was also called Richard, but couldn’t be more different to me otherwise. I told him I had only skied once before and had forgotten the few things that I had learned, but I think he didn’t quite understand as he wanted us to ski down quite a steep hill to get our passes. I mean, sure, it must be disappointing when you’re highly skilled at something to have to teach an utter klutz, but no one had told him that that was what was happening.

We went over the valley to the nursery slopes and I was already in agony again before we’d got on the snow. Once again the boots were crushing my feet in a way that I felt certain couldn’t be the way it was meant to be.  It was a pain that made me feel sick and made me pretty sure that this wasn’t going to be the day where my views on skiing turned around. But we made a bit of progress in the morning and it was as much fun as being tortured can be. I had a few falls, once falling off the mini chair lift thing (the one that’s a long rope with a little bobbin that you slip between your legs), but loads of 5 year old kids did that too so I didn’t feel bad.

We broke for lunch which meant I could take the boots off for a bit and I realised this was much worse than last time. I could barely walk, so it was lucky I could now ski a bit as that was going to be the only way I can get round. I realised that my strange short but wide hobbit feet are clearly not made for skiing, or at least that people who make skiing equipment assume that someone like me only exists in overlong films that stretch a short book way beyond its natural length. It annoyed me that I had all the pain of hobbit feet, with none of the getting to be in the Lord of the Rings/Hobbit movies as a result. But after lunch I hobbled back to the rental shop and got some boots that were a bit wider and which hardly hurt at all, though partly because they put my feet to sleep.

It was amazing skiing in the afternoon without the pain, a brave new world of sliding down a slope in relative comfort. I mean, I still didn’t like skiing and found every moment terrifying, even though we were on the nursery slopes and fell over every time I lost my minimal confidence, but it was mainly the foot pain that had caused me to hate the pastime so much and without it it was just stupid, and not horrifying. The best bet for comfortable skiing is to get ski boots made especially for you, but with a maximum of two more skiing trips in my lifetime (and a minimum of zero, hopefully) that does not seem like a good investment.

And we stopped skiing at about 3 and went back to the hotel for a beer and I remembered what it is I like about skiing holidays, when the skiing part stops.

Richard was a bit bamboozled about why a man who was so bad at skiing and who clearly hated it had come to take skiing lessons from someone who was better than this. But he took it on his handsome chin and we had some breakthroughs, so whilst not necessarily having the time of my life, I was proud of myself for picking myself up and getting better at something that I am shit at and hate.

We went to the pool with Phoebe and had some fun. We took some selfies and Phoebe decided it would be funny to put her rubber duck in my mouth. She found this highly amusing. She was right, because that is not where a rubber duck belongs. She is funny.