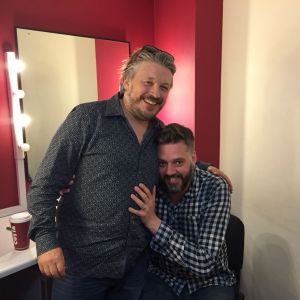 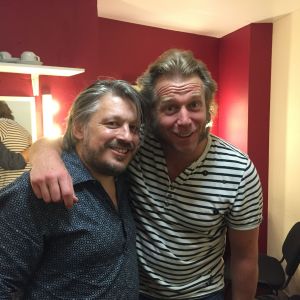 RHLSTP is back (though not til June 15th for those of you who ingest the podcasts). But today I spent the morning and afternoon researching my guests (i.e. looking them up on wikipedia) and trying to think up new emergency questions to stop this franchise going stale.

It feels like an age since we last did this but I was surprised to find out that it’s over six months. No wonder it was taking me a little while to get back into the swing. But, at least once the guests are booked this is a fun and stress-free job that I have somehow created for myself. As I have said we’re taking a bit of a punt this time round and not directly raising money to pay for it in the hope that we might tempt in some more badge subscribers (or in fact just 3000 more people buying this DVD would pay for the filming). But how we pay is not important (until they come for my house), what’s important is asking an increasing succession of comedians if they have ever tried to suck their own cock (not that I do that any more).

It was good to get back to the theatre. Some parts of the year this feels like my second home, but it’s been a little while since I have come here and so it was great to see the staff and the RHLSTP crew and to have George, the incompetent sound man complain about buzzing on the mic, which he then realised was actually down to him not having plugged his cables in properly. Nothing changes.

Iain Lee arrived early and we chatted a fair bit beforehand, about the meaningless and ridiculous rivalry we once had that we hopefully have now punctured by bothering to talk to each other. He’s a charming man, if one that gets into all kinds of scrapes (as you’ll find out in the podcast). I knew this first one would be an easy one to do, to get me back into the flow, though was equally aware that it might be more difficult to have a regular conversation with Tony Law. But you don’t book Tony Law if you want things to be regular.

I needn’t have worried about not remembering what to do as podcast Rich took the reins and was immediately up to mischief and attempting to find comedy in things that are definitely not funny. But interesting to find out about Lee’s journey (and also that he was paid way more for doing the 11 o clock show than I was for doing TMWRNJ) and to find out that he’d been hurt by our jokes (even though he acknowledged he did much worse to others). It was freeform and led to some places I wasn’t expecting. But not in the same way that Tony Law’s one did. It’s like his brain is a radio and someone is constantly swivelling the dial so that one moment you’re on history, then fantasy, then insanity and then pinpoint sane philosophy. It’s a discombobulating journey to go on, especially if, like me, you’re getting a bit tired, but I gamely attempted (and largely failed) to get some actual questions in. Most of it was crazy funny, some of it was just plain confusing, but this guy works like an ocean of consciousness, which is the recipient of all the streams of consciousness in the world. He is a total sweetheart (though last time I interviewed him in Edinburgh when he was in the middle of some shit, he was occasionally genuinely a bit scary) though sometimes it’s hard to know if he’s riffing or on the edge of a breakdown. Out of all the questions it was probably Desert Island Dicks that got him closest to malfunctioning like a robot destroyed by logic or love. And in his new show, he claims, he’s trying to destroy comedy so that everyone has to give up on it. But he’s going to fail, because he’s funny, if mentally exhausting. Unbelievably the website www.tonylawexhausts.co.uk is not about him.

With no end time we were able to do old school, too long podcasts that stretch patience and then snap back and draw you in. This was a good start to the series and I think there are going to be some tricky interviews amongst the people I have booked in (because most comedians are a bit cracked to start with and this job and success just make them worse/better).

When I was struggling to get anyone booked a month or so ago I wondered if it was maybe time to leave this format behind, but it’s such fun and so (sort of) easy and I think it could just keep going forever. It exists (a bit like Tony Law) in its own world and is not for everyone. But it was gratifying to have a nearly full theatre for two funny, though not super-famous guests and to be back to that balance of friendliness and rudeness that make this thing tick.

They start going out on 15th June. And there’s some exciting guests to come. On top of the ones already mentioned

20th June one of my guests will be David Cross - I don’t know if that is as exciting to everyone else as it is to me, but I can’t believe he’s doing it. And 11th July will be the rescheduled Graham Linehan (as well as Sofie Hagen).

Come along to some of these if you can.