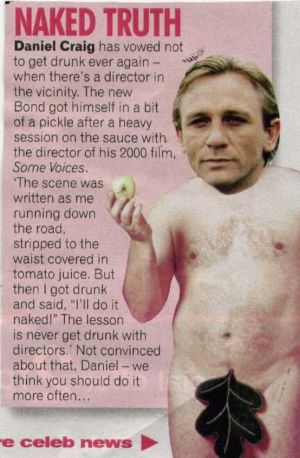 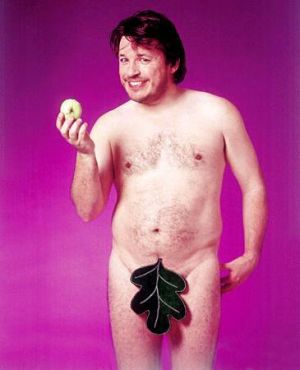 The producer of today┬Æs Andrew Collings show texted me this evening to tell me to look at page 6 of the Sunday Mirror magazine. Apparently, according to him, they had grafted new James Bond Daniel Craig┬Æs head on to my body (in a nearly nude photo taken for Talking Cock). Surely this had to be some kind of mistake or joke. My head on Daniel Craig┬Æs body would be slightly more believable, but why would they need to put the head of a man who I presume already has quite a sexy body on the body of someone who with the best will in the world is hardly an Adonis.
I went out to buy a copy to see for myself and it all turned out to be horribly true. It seemed such a surreal juxtaposition of images that I had to keep looking at it to make sure it was true. Daniel Craig┬Æs body is not good enough to act as his own body in a photo and so someone has chosen to use my body to substitute for him. Indeed, no other near nude photo of any other man would do for this job. Presumably a picture editor had scoured thousands upon thousands of images and decided that my body would be the most believable nude version of Daniel Craig possible.
At the very least I can now add to the CV that includes performing Hamlet on the RSC stage, the role of James Bond┬Æs body double. I may actually write to Cubby Broccolli (and I don┬Æt care if he is dead) saying that I should be employed in this job in all Craig┬Æs films. That would be some kind of job. Any time James Bond was called on to be naked I would step in to kiss and canoodle with all those beautiful women. The thing is Craig┬Æs body isn┬Æt quite good enough to do the job, whilst mine apparently is.
There is, however, a part of me that feels used and abused. What right do the Sunday Mirror have to take a photo of me and then crudely affix the head of a much better looking man on to it. It makes me feel like a cheap whore just being used for my body. I am not credited as being the man with the body perfect enough to pass for James Bond and they have obliterated my own head. Is this even allowed? Surely I should be paid a five figure sum for having my nude body splashed across a million magazines and being gawped at by strangers who don┬Æt even realise that the photo is actually an attempt to publicise a show that I haven┬Æt done for about three years. I wonder if I can sue the Sunday Mirror. More likely I wonder if Daniel Craig can sue the Sunday Mirror for suggesting he has a flabby, pink monstrosity as this underneath his clothes. One way or another someone can make some money out of this.
I fear it might serve as the zenith of my career. Yeah Armando might be on the South Bank Show, but has he ever body doubled for James Bond? Well, only once, but it was George Lazenby and I just don┬Æt think that is as impressive.