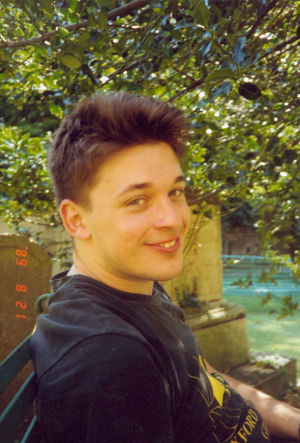 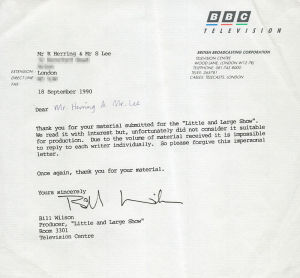 I continued floundering with my stand-up whilst Stewart won the Hackney Empire New Act of the Year and was offered representation by fledgling management company Avalon. A year later they offered to represent me.
On the first day back at work (advertising sales) this decade I was called into the manager's office and sacked. This wasn't really a tragedy, but it was the last real job I ever had. Having been sacked I was eligible for the dole and after 8 weeks enrolled on the Enterprise Allowance Scheme. I was a full time (and very poor) writer/comedian.
We began writing for Radio 4 topical satire show, "Weekending". It wasn't a show or a style of comedy that we personally liked (very early on we had agreed to try and avoid doing comedy about TV shows, personalities or clanking topical satire - which is pretty much what Weekending was about. Interestingly many of our most popular skits have broken those rules at least partly). We wrote for this show for a year and I found it so stressful that I once hid in a box in the writer's room.One producer used 20 seconds of our stuff in 8 weeks, which was quite disappointing when this was my main source of income! However we also got to work with and meet Sarah Smith, Harry Thompson and Armando Iannucci (who we knew a bit already), who would all be instrumental in getting us more challenging and enjoyable work.
On going back over all this I realise how miserable I was at the time.
We were lucky enough to be given a radio light entertainment grant for a year, where we were paid a small amount of money and became effectively staff writers. Don't think they do it any more. The first series of On The Hour was broadcast this year. Armando asked us to be involved, based on our subversive work on Weekending.We wrote around about a third of the first series and were certainly instrumental in creating the tone of the piece. But it had a magnificent cast, Steve Coogan, Rebecca Front, Doon Mackichan, Dave Schneider and Patrick Marber and if that wasn't enough Chris Morris fronted it. It went on to become BBC2's The Day Today, but Stew and me were dropped because we wanted to have some ownership over characters and ideas that we had created. I'm not going to go over it all again here. I think it was the best for everyone in the end and I would happily work with any of them (except one, can you guess) again. At the time the money we would have been paid for a 13 minute TV commission would have been extremely welcome, but it was good to have more time eating jacket potatoes and drinking cooking sherry.
I am guessing that 1991 was also the year we recorded the pilot episode of That's Wiggins Yard. It was a radio show written by Lee and Herring, Peter Baynham and Julian Dutton and Andy Parsons and Henry Naylor and I was in it, as was Alistair Macgowan and a bloke who I saw in Brookside the other day. It was mental, set in a location similar to Neal's Yard in London and was semi-topical. I have a tape somewhere, but I don't think you'll ever hear it. It did not get commissioned, but I got my Equity card!
We also wrote a show called "End of the Roadshow" which toured universities and featured Nick Hancock, Neil Mullarkey, Tony Hawkes and Carla Mendonca or Rebecca Front, depending on the episode. Armando contributed gags. God knows what it was like! I only remember one line - "additional material by Armando Ianucci who is diphallactic". 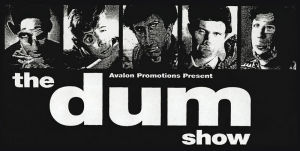 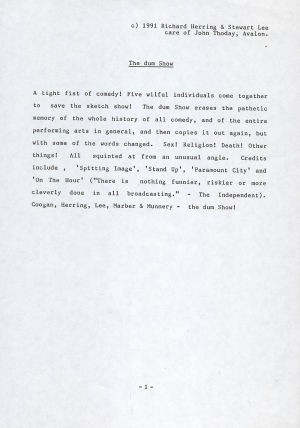 I think it was this year that my solo stand-up career ground to a halt.I did a student gig where I ended up dying and taking off my trousers and decided that that was enough. Despite some success in certain clubs (I remember closing at the Balham Banana and getting an encore) I had found my two year stand up career to be largely humiliating and unsatisfying. I believed that I was not a solo performer. I vowed never to attempt it again.
We did the first series of Lionel Nimrod's Inexplicable World , the first time we performed on radio. Sarah Smith who produced it (as well as Wiggins and Roadshow) had to really fight Radio 4 bosses to get the series made. I believe she threatened to resign when they decided not to make the series. So many thanks to her for that, because it worked.
I think we made two pilots, the first of which, for some reason, was partly a parody of "The Word" where we were playing characters, one of whom was called Barry Crustings.
We did two series and the show featured us, Armando and Rebecca Front with Tom Baker top and tailing the show as the mysterious Lionel Nimrod.
I made my first return to Edinburgh for four years to appear in a sketch show called "the dum show".The cast was me, Stew, Simon Munnery, Patrick Marber and Steve Coogan. My God, it should have been brilliant. But we argued a lot about what should go in and who should play what (I think Patrick thought he should play everything!) At a time when my confidence in performing was very low, Patrick's criticism of my acting was very depressing. I really thought the show could have worked and we'd written some great sketches (including one about a club for people called Ian) but we all essentially gave up on it and Stew (particularly) fell out with Patrick.
Late in the run a TV producer came and was keen to make it into a TV show.Suddenly Patrick decided the show was a great idea. But it was too late. Coogan won the Perrier with his other show, directed by Marber. Patrick got all the things he wanted.
I think we also wrote for Stab in the Dark, this year. It was a Channel 4 opinion-based series featuring David Baddiel, Tracey Macleod and Michael Gove. We only wrote for and with Tracey. She was a great laugh, although I never really got into the flow with this series and Stew did most of the work. When Tracey found out that I got really wound-up by the sound of polystyrene rubbing against polystyrene she once hid behind a car with some polystyrene and jumped out at me rubbing it. Not the serious Newsnight style presenter that I had expected. 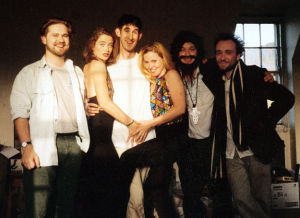 At Edinburgh we did a stage version of Nimrod, off the back of the second series. Rebecca and Armando couldn't do it, so we brought in the future dream team of Ronnie Ancona and Alistair Macgowan. I remember them particularly as the vampires who later appeared on Fist of Fun.
I also did Ra-Ra-Rasputin which was the life story ofRasputin set to the music of Boney M (years before Mama Mia or We Will Rock You) I lost weight and learned to dance in order to play the character. The show also featured Andrew Mackay who is the Prof from Time Gentlemen Please, Sally Phillips from Smack the Pony, Ben Moor and Clare de Vries (who wrote a book about going round America with her cat, I think). It was a crazy show, with complicated dancing on the tiniest of stages. Though hardly anyone who saw it, hundreds of people have told me how great it was. William Cook from the Guardian was a big fan of it. Unfortunately the rest of the Perrier committee that year thought it was shit, so nothing ever became of it.
In Edinburgh that year we also recorded the first episode in the radio series of Fist of Fun.Subsequent episodes were recorded at colleges round the country and Dale Winton was a guest, just before he really became big!
It was round about now that we wrote for a Radio 4 pilot called "Bob Says Who?" which was a whacky quiz format, hosted by Bob Mortimer. It never got made, but wasn't a million miles away from Shooting Stars. Not saying it was our idea, it was very much Bob's style, but interesting.
I also appeared in two short series of the Armando Iannucci show on Radio 1. The second series was in 94. 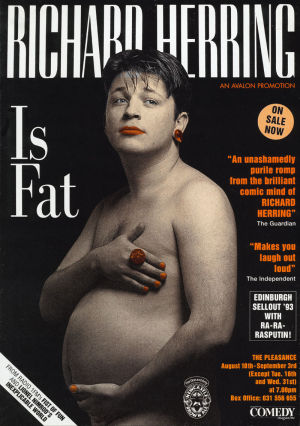 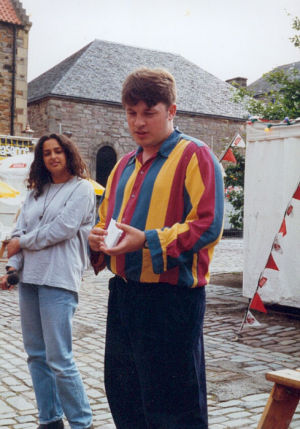 I'm pretty sure we recorded the TV pilot of Fist of Fun this year.
We did the first series of our Radio 1, live, Lee and Herring shows which were tremendous fun.
At Edinburgh I did a show called Richard Herring is Fat,about how I'd put on two stone in the previous twelve months. You can read the script here. It also featured Sally Phillips and Kevin Eldon. We appeared with some good people, hey!
I also did a show (with Stew most days plus guests) called This Morning With Richard, Not Judy. It was a shambolic chat show with sketches and turns, where tickets were auctioned in the Pleasance courtyard and went for as little as 1p and as much as £40 depending on demand. Because there was no publicity for the show I was able to spend money on fabulous prizes to give away to the audience.I spent £350 on a second hand car which was won by a bemused student (who already owned exactly the same model of car) Despite this profligacy I still made money on the show (the only time this has happened in Edinburgh). Don't tell the tax man but the drawer by my bed was full of cash all Edinburgh long.
I probably wrote the first draft of my never made sit-com Sex Amongst the Stalagmites this year. You can read a later draft of it here. I could do better if I was to try again now, but there's clearly something in it.
I did a radio show about a visit to Cadbury's Chocolate Factory. There's an early draft of the script of that here.