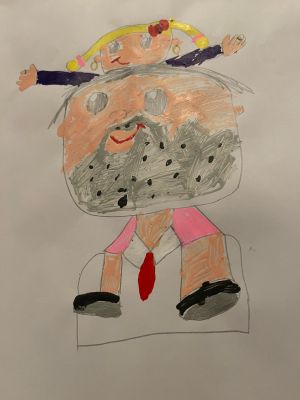 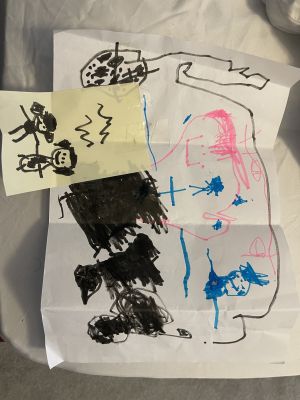 I am back in the big time (of losers) and was off to Sunday Brunch this morning, but only after opening my Father’s Day presents in bed. The kids had gone a bit overboard in creating works of art for me (and in Ernie’s case, just wrapping up stuff from his room that he no longer wanted, like a tiny figure of Peppa Pig’s brother and a pound coin, plus a nice teddy bear that he’d nicked from his grandparents’ house). He’d also done some messy pictures, which I loved, of course, even though they were of about the standard that I myself can manage.
My cheeky daughter who professes to think I am a loser and who is reluctant to hug me had created some beautiful works of art, including a picture of a barbecue which opened up to say Happy Father’s Day and an absolutely glorious picture of her riding on my shoulders. I am often dumbfounded but the speed at which the kids’ skills move on and I really didn’t think she could create something to this standard (way beyond my own limited artistic talents). And I was moved by the subject matter - us together, her flying on my back. Obviously it’s going in a frame and up on a wall. What a wonderful thing being a parent can be.
I don’t think I will put my son’s one in a frame. It’s frankly embarrassing in comparison.
I was, as always, tired, but doubly so because doing a gig had really taken it out of me and my son had woken me up three times in the night. And now I had to go to London to sit in a studio for three hours and eat delicious food whilst sitting next to one of the Saturdays. It’s a tough life.
It was a fun morning and I got to talk about Stone Clearing and my weird ventriloquism show on Channel 4, and talk about my excised bollock. It’s gratifying to see that the title of my book always gets a great response, a huge laugh from the crew in this case.
I fell asleep in the car on the way back to Hertfordshire (I wasn’t driving), but it didn’t really do me much good. I was going on to the birthday party of a girl from Ernie’s class and it was in a big room with some huge inflatables for the kids to play on. The place was packed and predictably anarchic. At one point I noticed kids climbing on the walls of one of the flatter, but still high, inflatables and then trying to jump across the dividing wall between two channels. It looked dangerous, especially as there were no safety mats on this side of the inflatable. Ernie was in there joining in and I was all set to get up and tell him to stop, but another dad headed over and Ernie was nowhere to be seen now. Suddenly I saw Ernie climbing the wall and before I could get up to admonish him he slipped or was bounced and fell over the wall. I think he was heading to the ground head first, but he made a grab at something and spun round. I had time to shout “Nooooo” like I was in a film, but he crashed on to the hard floor, from a reasonable height. I ran over and he was crying and had hurt his foot, but all his toes still wiggled and he was soon up and running around again, but it had been a terrifying few seconds. Of course it had to be him who got into danger. That’s just Ernie. Kids bounce and nearly always something like this will end up being nothing. But it seemed a bit dumb that there was no safety matting on that side. Our son is an idiot, but he’s not the only 4 year old idiot in the world.
We were then off to a Father’s Day dinner. Though I was well fed from Sunday Brunch and would have preferred a Father’s Day sleep.
Phoebe is still buzzing form the burn she gave me yesterday, though she keeps forgetting what it’s called and referred to it as a sting today. Which I burned her for. We passed a bike with advertising on it and Phoebe said she wanted to ride it, because she loves riding her bike. I told her that if she rode that one she would get paid for doing something she loved. How amazing would that be. That would be like daddy getting paid for telling jokes.
I laboured the point and told her that daddy DID get paid for telling jokes and she said,”Yes, people pay you to stop telling them.” She’d burned me again. Two for two.
Utterly knackered, I had to bail half way through the kids’ bedtime and go to bed myself. Maybe I am not ready to return to stand up. Or if I do, I will have to allow a recuperation day after every gig.